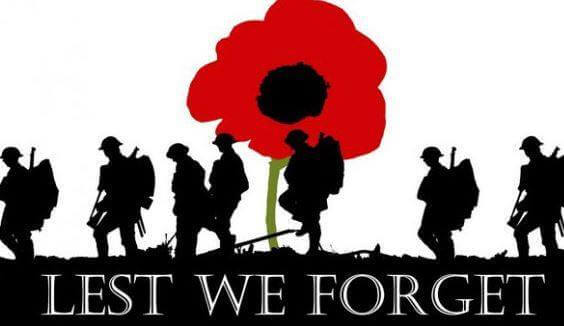 It was an honour to be asked to deliver the address at the Anzac Day Memorial service at the Ranfurly war veterans’ complex in Three Kings. It has existed since 1903, built by Lord Ranfurly as a memorial to New Zealand soldiers who served in the Boer War. He thought it more valuable than a statue, and so it has proven to be. The original house is now being wonderfully refurbished, and around it will be 200 retirement units, to subside the work of the Trust in looking after the veterans of numerous conflicts since World War 2. So, the complex is deeply connected with our military past, and the strategy for its future viability is a smart integration process with the needs of the wider older community. It’s a very clever way of moving forward. The impressive hospital in the grounds has a lovely Field of Remembrance outside now, and on the door of the hospital rooms are names and ranks… it is so nice to see these men and women acknowledged so well, cared for so well. What I said was this, more or less –

Service hasn’t always been so well acknowledged. I’m old enough to remember that long period when Anzac Day was taken for granted, until New Zealand’s younger people made it once again the great day of remembrance that it should be. Aside from reaching the rank of sergeant in school cadets, by finding a stripe in the storeroom and promoting myself from corporal, I have had nothing to do with war. Like many of us here. We are part of the lucky cohort that has never seen war, and of course everyone worries now if that golden era is about to be over. Who knows? I collect predictions. That’s one of my hobbies. Humans are not very good at predictions. When New York’s first apartment building, speaking of building apartments, was planned in 1869, a prominent architect said it would fail, because gentlemen would never live on shelves. Most predictions have a short shelf life, and it’s the same when it comes to war.

The BBC was looking at the peaceful state of the world at the beginning of 2014. Between 1950 (when the Korean War started) and 2007, 150,000 people had died on average every year from war. From 2008 to 2013 that figure dropped dramatically, to 28,000 per year. So, the BBC’s political editor surmised it would even be lower in 2014 and keep getting lower. But 2014 was the year of change – 163,000 deaths. Fatalities have kept climbing. In that same year, the New York Times ran an op-ed with the headline ‘The End of War?’. The well-known economist Julian Simon was quoted. It was his opinion that there was “less and less to be gained economically from it. As people get richer and smarter, their lives and their knowledge become far more valuable than the land, minerals and natural resources they used to fight over.”

That sounded good three years ago; but we live again in uncertain times, as we always used to. Every New Zealander knows about Gallipoli, a decent number know about the slaughter at the Somme and Ypres and Passchendaele. Not many Kiwis, now, know that by the end of the Great War we were the best fighting force in the British army, and in the last 100 days of that war the New Zealanders spearheaded victory after victory. And it was that success that killed my great-uncle Joseph McCreanor.

I had to search the graveyards to find Joe. Our High Commissioner back then wanted NZ’s memorials not to be included on the great Menin Gate in Ypres, which has 55,000 names on it. 500,000 died in the salient around the town. You have to hunt for our names.

Down the road, for example, at Messines, is a graveyard surrounded by farmland, and it was a nice day when we were there, with paddocks of llamas and ponies, and in the distance the hazy pastel outlines of ridges and copses. It’s impossible now to imagine batteries of guns on those ridges, or the knee-deep mud on the flat land. Men of the Auckland, Otago, Wellington and Canterbury regiments have their names on the walls there: from the Machine Gun Corps, the Entrenching Battalion, the Maori Battalion; 700 died at Messines. Right now, if you take yourself back a century, that battle is still a few weeks away. 100 years ago today, New Zealanders were fighting just down the road at Arras, another huge conflict.

But while we know so much about Gallipoli, much of the intricate detail of it, very few really of the post-Gallipoli stories are told, and those stories are about great guts, without much glory. There are a few RSA poppies wedged in cracks in the walls at Messines, to show we do visit sometimes. And poppies there are an everyday item, part of the merchandise of tourism: poppy pins, poppy tins, even poppy chocolates.

On Anzac Day two years ago, getting back to my Uncle Joseph, we joined other New Zealanders setting off in the footsteps of the New Zealand Rifle Brigade, marching to assault the fortified town of Le Quesnoy in 1918. This is thankfully becoming well-known history now. Big, thick, 30-foot high walls around the town like a mediaeval castle. The New Zealanders were put in charge of an actual battle for the first time, and they were brilliant. They launched a hugely skilled and successful operation in which no civilians died. They dropped smoke bombs from their mortars right on top of those walls.

It is very moving to stand underneath the wall where Second Lieutenant Leslie Averill went up a rickety ladder armed with a pistol to lead the New Zealanders into the town, expecting at any moment to be shot; dozens of his comrades already had been. Second lieutenants had high casualty rates, they were often intrepid NCOs promoted in the field. Leslie Averill had won a Military Cross at Bapaume a few weeks earlier, and no doubt he knew my Uncle Joe.

It took me a long time to find Joseph in the Bancourt British Military Cemetery, in northern France, in the middle of nowhere. These graveyards are all beautifully maintained, but they are so far from home. And I sat down next to him and all I could think of saying was “We’ve come to see you at last, Joe. Thank you.”

My mother’s family had come out from Ireland; and Joe came too. Joe was in the Royal Marines, and he deserted. He found work as a porter at the Auckland Railway Station and one day he ran into none other than his commanding officer, who was somehow in Auckland. Nothing was done. Joe obviously didn’t forget this, he could presumably have been arrested and court-martialled. There was a deserters’ amnesty when war broke out, and Joe signed up. He loved his family, he had every reason to stay, but he went. He sailed from Wellington with the New Zealand Division and ended up in the 2nd Brigade, which bore the brunt of fighting at Passchendaele and Messines.

Joe was praised in despatches; he was a Lewis Gunner. He made corporal, and then sergeant. The war was only weeks from ending, as it turned out, when the 2nd Brigade rolled the Germans back in the turning-point battle of Bapaume. And you would think this name, Bapaume, would be known by every Kiwi, but we have chosen to remember that war in a different way.

At night, our men had very little cover in the open fields. It was Sniper’s Alley for the Germans. Before dawn on the 1st of September 1918 Joe was shot. That day the New Zealanders broke through and the Germans fled. And they kept fleeing from then on, pretty much. If Joe had lasted one more day, he probably would have survived the war.

But I didn’t know any of that when I sat down beside him, I thought he had made the rank of sergeant and redeemed himself and served well enough, and that was it. But he had received the DCM for extreme bravery on the Western Front. And I saw on the headstone that he had died a Second Lieutenant and been awarded the Military Cross.

We’re now seeing the centenaries of battles where our losses well and truly exceeded those at Gallipoli: 5,000 New Zealand soldiers died at Passchendaele alone. 1000 men who didn’t come back from the Somme have no graves at all. We may have been fighting a vainglorious British war, as some say, but we were valiant.

It may seem to all of us in 2017 that war is simply hell, and simply useless, but it is also simply amazing what men and women were capable of. Nurses were killed on the front lines too. If you’re being shelled by artillery I think you can call that the front line. That’s how some of the nurses died, just doing their rounds. So, although we fight wars with no front lines anymore, it was the same for them sometimes.

It is simply humbling to read about these levels of courage; these were people who should be far better remembered. Anzac Day commemorates all our wars and conflicts, 42 of them since Vietnam, but it began because of that Great War, which robbed New Zealand of a generation of great men and women. 100 years ago, a lot of them were about to die heroic deaths.

Thank you again for asking me to speak, and far greater thanks to all the people here today who have seen service, and who have their own stories to tell, and they are stories we need to listen to, because the leaders of the world at the moment seem to have forgotten them.

It would be wonderful if we continued to look at those crosses in the graveyards with admiration… but if we never had any more of them to look at from now on. That’s not a prediction.